IGN takes a look at Scarlet Nexus footage and discusses a bit of the game’s development with Game Director Kenji Anabuki and Producer Keita Iizuka.

Scarlet Nexus combat is heavily discussed Scarlet Nexus dev Interview as they elaborate on what potential players have seen in the multiple Scarlet Nexus trailer (s) and Scarlet Nexus gameplay trailer (s). IGN’s talk with the game developers highlights how this year’s next gen hardware will help elevate the graphics and the game’s anime-style and usher in a new RPG experience.

The Scarlet Nexus devs also talked a bit about how Scarlet Nexus versions will slightly differ between current gen and next gen hardware. Specifically, the devs discuss the potential for Scarlet Nexus PS5 version to have “unique services.”

For more on Scarlet Nexus (the new game from Bandai Namco), stay tuned to IGN. 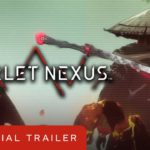