The developers of a new arcade beat-em up styled game called Shing walk you through its unique approach to combat, characters, and more. 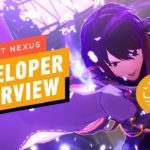