God of War (2018) received a PS5 patch that enables the game to run at a 4k checkerboard resolution with 60 frames per second.

God of War was already a great-looking game, but a new patch makes it run even smoother on PS5. We took the new update for a spin to see Old Man Kratos looking better than ever.

The free patch replaces the PS4 Pro’s performance vs fidelity setting with one default setting that combines both. Now you can play at 4K checkerboard resolution with 60 FPS. You also still have the option of playing in “Original Performance Experience,” which will run at 4K with 30 FPS.

And since God of War 2018 is one of the games included in the PS Plus Collection, you might already have access to give it a spin yourself. But first, watch us put it through its paces. 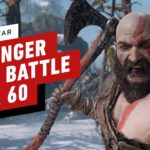