The Division 2 has been out for some time now, but it has always been locked at 30fps on consoles. Starting today, for owners of PlayStation 5 and Xbox Series X|S, you’ll finally get to play it in 4K at 60fps.

The Division 2 was released way back in March 2019. It was developed by Massive Entertainment and it was published by Ubisoft. A sequel to the first game of the same name, The Division 2 is a shared open-world third-person shooter where activated agents can team up online to take down the gang riddled factions of Washington D.C. 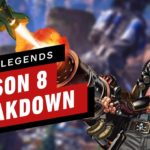