Michael Higham and Jean-Luc Seipke breakdown what you can expect from this Persona 5 Sequel and give their impressions of the first few hours.

Persona 5 Strikers, the action-based follow up to the original RPG Persona 5, is right around the corner and we’ve been able to play about five hours of the game. Here, Jean-Luc and Michael break down their experience and talk in-depth about how it adopts many elements of the original game.

This new story kicks off during summer vacation after the events of Persona 5. Everyone’s anticipating the return of main protagonist Joker’s return to Tokyo so they can hang out and enjoy some time off together. Of course, there’s an evil lurking about, and in the opening hours, it’s a fashion and pop idol who has been using the Metaverse to manipulate fans. It’s not exactly hard-hitting, but it is an excuse to fight shadows with all the style you’d expect from the Phantom Thieves.

While it may be low stakes narratively, combat is anything but. The musou-style action gameplay also incorporates mechanics from Shin Megami Tensei and Persona, including spell casting, elemental affinities, follow-up attacks, and SP management. It’s an exciting and bombastic translation of Persona 5’s sensibilities, but it can get a bit messy with the number of things happen at once in real time and types of challenges the tougher enemies present.

The new character Sophia, a phone-based AI that turns human in the Metaverse, is a nice addition as she fits quite well with the rest of the cast and even works as your shopkeeper. While Strikers cuts back on the social simulation mechanics of the original game, you still get to walk around the real world and talk to your friends. And when it’s time to go dungeon crawling, there are plenty of elements that shake up what you might expect from a Persona game.

If you want more coverage, be sure to read our in-depth preview of Persona 5 Strikers, or check out our full gameplay clip to see the game in action. Persona 5 Strikers launches on PS4, Switch, and PC on February 23, and stay tuned for future coverage of the game. 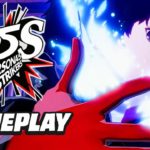 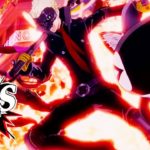