The rally racing series hits the Xbox Series X on console launch day, and you can see next-gen gameplay of Dirt 5 here.

Dirt 5 is the next entry in the rally racing series and takes on a more arcade-sim hybrid style, which you can see here in our gameplay of it running on the Xbox Series X. We show off a few different race types from Dirt 5’s career mode, such as Icebreaker, Ultracross, and Land Rush. The career mode offers several styles of racing that require different types of vehicles as you progress through it. A podcasting duo also tells the story of your driver while in menus as you jump from one race to the next and build your reputation.

One thing to note is that this is a preview build and driver AI has not been properly tweaked yet. I was able to take first place in each race fairly easily with difficulty set to Very Hard, but we expect that to be tuned properly by the time it launches.

Dirt 5 has two enhancement options on the Xbox Series X. What you see in the video above is Image Quality mode, which prioritizes visuals and appears to be able to hit 60 FPS most of the time. However, there were some frame drops when dirt, snow, and other particle effects kicked up on screen. Frame Rate mode, of course, brings down visual quality to hit higher FPS more consistently–Dirt 5 is also one of the games that takes advantage of next-gen’s 120FPS capabilities.

More coverage of the next-gen consoles is on the way, but for now, enjoy Dirt 5 gameplay on the Xbox Series X or check out my earlier hands-on Xbox Series X preview. 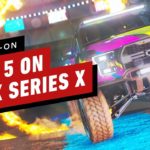 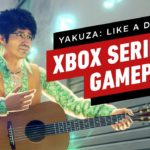