A new Marvel’s Avengers story trailer shows off what happened after the Avengers disbanded, and how Ms. Marvel must work against MODOK to reunite the team. 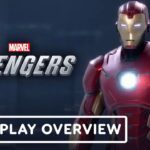