There’s low gravity and every player has 50 health. Snipers are the only weapon and Bandages the only healing item. Jump high and aim well! 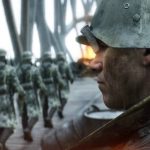